Land of the Burning Sands: The Griffin Mage Book 2 by Rachel Neumeier 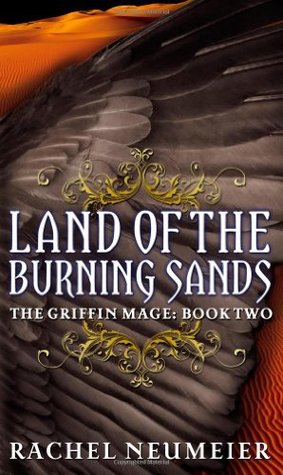 Like the first book, the writing for this book was a little hard to get into. The plot sort of moves a long slowly at the beginning, and more quickly at the middle until the end. The world-building, as in the first book, is compelling. The landscape in which the characters find themselves is well delineated.

The narrative follows a slave, Gereint, who is escaping his evil, brutal master. It has an entirely new set of characters from the first novel, until the middle of the book, when a few characters appear from the first book. There’s an absent-minded professor,Tehre, who comes from a good family and becomes a friend. It could be a completely different series written in the same world.

Gereint, as an escaped slave, brings up the subject of slavery and cruel slave masters, which is a side  theme of this novel. Slavery is used as a punishment, and the part of the his backstory that explains how he got to be a slave comes at exactly the right time in the novel. Whenever anything a fraught as slavery comes up in the literature, it can be treated simplistically, from the slave’s perspective or the owner’s perspective, each side thinking they are in the right. Gerient’s recovery from being ill-used as a slave takes place through the course of the novel, and such a healing process is very interesting to watch.

The villain of the first book, who is a cold mage, becomes sort of the hero of this book: at least, he becomes more human and his actions more defensible. The griffins are very much the enemy from his point of view, and even the escaped slave at some points. His battle is won, with a really interesting plot twist that will make the world more compelling.

There was a teaser at the end of this book for the third book in the series – should I read it? Will it tie all of these disparate characters together in a way that gives justice and closure? The teaser shared the story of an entirely new character, who seemed to have a complicated story, that seemed hard to get into…

When I am reading a book in a series, I am willing to put up with a few foibles in the first novel if the series shows promise. I can’t decide if I want to read the third book, in this series, though. After two novels, I can’t decide if the characters are people whose story I want to know.

Given the preponderance of YA fantasy novels,I think the author is trying to write to this audience. (This series is listed as YA literature on her website.) This series reads as PG: no kissing, even, which is fine really.  Most YA novels have plots which do not require mucking boots to wade through; most YA novels have less nuanced characters and even worlds.
I would be very curious to read a non-YA novel of hers. At some points in the novel, it seems like she’s interested in the intrigue of court politics and the complexities of the human story, but she has been told to dumb it down a bit for her audience… I don’t know. I should stop guessing author’s motives (in this, reading George R. R. Martin and Diana Gabaldon ruined me).

A version of this review appeared originally on Goodreads; you can find it here.

1 thought on “Review: Land of the Burning Sands”