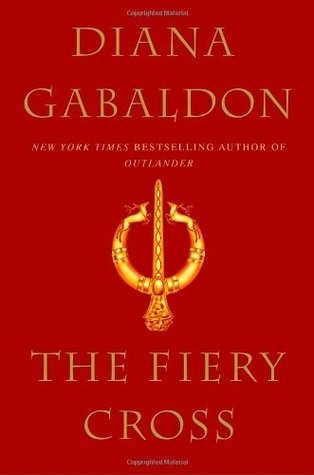 Okay so the defining moment for me was when Claire, who must have done some sort of “collection,” is looking at Jamie’s sperm in her home-made microscope.

Science is fine, if you’re into that sort of thing, but really? These two characters, whose love defies all time, yadda yadda yadda… and the thing that Claire does with her time is try to grow penicillin, and look at sperm in a microscope? All Jamie does, basically, is farm.

Farming is not really that exciting. Go fig.

I get that she’s trying to describe how difficult life is in the 18th century, but she’s abandoned the classic concepts of plot and character development. Maybe half a dozen events occur in this 900+ page novel.

Historically, the fiery cross was a cross made of wood and dipped in blood, and it was used to rally the clans to war. Jamie uses one to light the clans to the Revolutionary War in the New World. That’s one of the five things besides farming that happens in this book. It’s a total bummer, because the characters had such promise in the first three books.

I’ve been thinking about this book series a lot lately, mostly because of the TV show, Outlander. The TV show, with the executive director Ron Moore, is really fantastic. Like amazing fantastic. The costumes, the very pretty actors, the cinematography, the music. It’s all amazing. It hangs together really well. Ron Moore has been behind quite a bit of the television I have watched for the past twenty years. His credits include Star Trek: The Next Generation, Carnivàle, and Battlestar Galactica and Caprica.

I watched quite a few of the “extras” of Outlander, and it is clear that Ron Moore is just a guy who loves to wear a kilt, but also someone who is committed to telling the story in a way which honors the novels and the world of the novels, while translating the story into a different medium.

The characters in the novel are extremely well-cast, and well-costumed. The acting is really astounding.

Then there is the rape…. There is quite a bit of rape in the novels. Claire almost gets raped twice in the first book (I’ve honestly lost count in the other books.) Jamie offers himself to BlackJack Randall in exchange for Claire’s life – what happens after that, in my worldview, counts as rape. “Please, let me be your plaything in exchange for my wife’s life.” This is consent under duress, with a person in a position of power exploiting that power in a sexual way. Rape.

I haven’t seen the film of it (Episode 15), although based on the Wedding scene (Episode 7), I am certain that that many aspects of the rape were shown, because it becomes a part of Jamie’s character. I read a lot of articles online about the tv show, and how radical it was, and how troubling that episode was, just brutal. I just haven’t been able to bring myself to watch it.