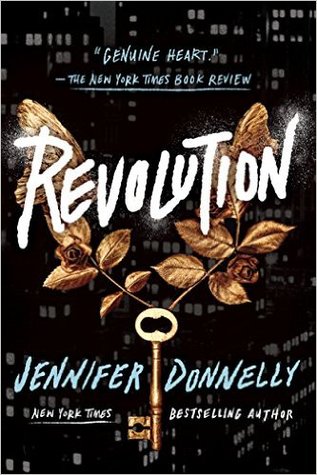 An interesting book. The main character, Andi, held my attention throughout. She’s a teenager who watched her brother get murdered, and is going through the grieving process, with layered trauma. No one really understands her and helps her to feel normal, except her music teacher, who is a concentration camp survivor. Her medication gives her hallucinations when she takes too much of it (which sort of becomes a way to cheat through some of the more difficult connections in the novel). At the beginning of the novel, her estranged father swoops in, puts her mother in a psych hospital, and drags her to Paris. There are multiple layers of abandonment, grief, rage, and trauma that Andi is feeling, and this emotional complexity is handled very well by the author.

The novel’s side story has the French Revolution as its backdrop, and there you also understand the title of the book. I feel like I know very little about the French Revolution, except it was bloody and horrible (I’ve seen Les Mis three times!). So this book introduced the topic in a way that was accessible to me. I learned quite a bit about the day-to-day life of people during 19th century France.

At the apartment where she and her father are staying with friends in Paris, Andi finds  a journal, in a secret compartment of a guitar case. The journal is the story of Alexandrine, a woman from a family of theater and puppeteer artists, who finds favor with the queen, specifically, her son, Louis-Charles. At times, the journal becomes more interesting than the main story, which is sort of a problem. The author handles the layers of each character’s story pretty deftly, but the conclusion of the first part (where Andi reveals how her brother died) could have come much earlier.

Grief and medication are rarely handled so well in fiction, in my opinion. The impulse which our culture has to throw medication at the problem of grief, instead of connection (like therapy, volunteering, or group therapy) is pathological and deeply harmful. So, Andi’s problems at the beginning of the book – grief, shame, misplaced blame for her brother’s death – are solved not by the medication, but through a connection she finds with someone who can listen to her story. This is a profound, counter-cultural statement, and the author makes it subtly, with both Andi and Alexandrine.

What else? There are a few gimmicks, which help connect the plot-dots, but they’re still gimmicks. A story about the French Revolution and/or Paris would not be complete without multiple mentions of the guillotine, and a trip through the Catacombs! There is this musical theme of a fictional composer that the author includes, which is really important to Andi, but it gets a mite annoying. The trip through the 19th century that Andi takes after she gets concussed in part two is sort of annoying and gimmicky. Other than that, fine work.