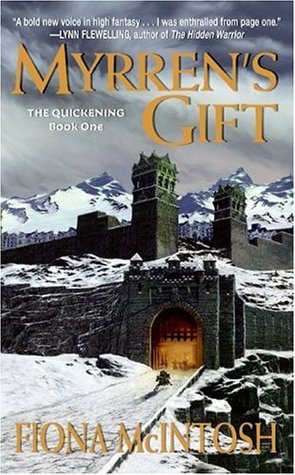 I do love high fantasy: princes, princesses, high dudgeon drama. I love it all. I love female protagonists who are strong, feisty, and plucky. I love main characters who go who struggle: who muddle through like the rest of us. I like scheming, and I love to hate the bad guys as much as I love to love the good guys.

This book has all of that, and more. It has unexplained magic. It has high treason, misunderstood; it has a beloved protagonist who falls unbearably in love and messes it up. It has a diabolical villain who is a bit flat for a psychopath, but there is the killing of kittens and puppies offstage.

That being said, I thought this book would be about a character named “Merryn,” and there are is a lot of exposition about her, and then she gets killed off horribly. The violence towards her is not celebrated the way some writers celebrate violence towards women (Terry Goodkind, I’m looking at you.). After I finished the book, I understood that the book is not about Myrren, it is about her gift to the character Wyl. Hence the title, duh.

(Spoiler alert!) Without giving too much away, the gift is an inability to be killed, which comes in handy, because they keep trying to kill Wyl, and they keep succeeding.

I liked this book a lot. So much so, that I checked out the two sequels in the trilogy, and will pick them up later from the library this afternoon.